Department of Engineering and Technology

Department of Humanities and Applied Sciences

School of Management Sciences (SMS) Library & Documentation Centre has established in 2008 around 5500 books including engineering & management. After around 11 years of existence, the number of books has crossed the 24 thousand. The Library has well qualified staff headed by a Librarian (IMS) and Librarian (IET) with the support of Assistant Librarians and other staff members.

The SMS Library is automated in its operations using the Soul 2.0 software and works on the DDC (22nd edition) platform. The Library encompasses an area of 706 sq meters and has two reading hall of capacity 150 (90 in IET & 60 in IMS). Two stack rooms (IET & IMS) hold the books and other reading materials in hard copies. Further, two rich repository of online resources have been made available to the users through the ‘e-Library’ in the form of e-books and e-journals also through DELNET and NDL (National Digital Library of India) of which membership exists regularly.

The Library has a well-defined policy for acquisition, usage and disposal of the learning resources supported by a faculty-led team popularly known as Library Coordination Committee, which is empowered to take most of the Library related decisions. The library accepts suggestions from all its stakeholders and decisions are taken on them if found beneficial to the Library services and users.

For Membership:-Get registered BY FILLING APPLICATION FORM & submit at the circulation Section Issuance of books.

Note: All issue and return would be suspended during the 3rd & 4th week of May every year for annual inventory check.

Number of books and Loan Period 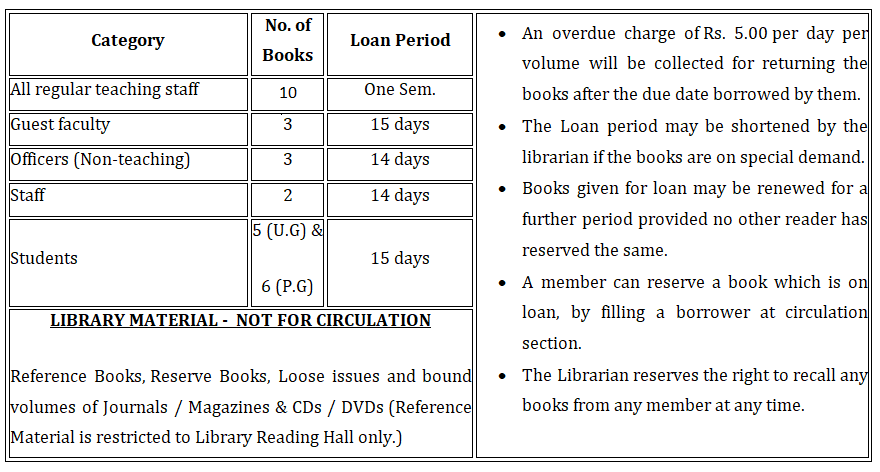 NOTE- Use of Mobile Phones is strictly not allowed inside the library premises.

NATIONAL DIGITAL LIBRARY:- Ministry of Human Resource Development (MHRD) under its National Mission on Education through Information and Communication Technology (NMEICT) has initiated the National Digital Library of India (NDL India) pilot project to develop a framework of virtual repository of learning resources with a single-window search facility. Filtered and federated searching is employed to facilitate focused searching so that learners can find out the right resource with least effort and in minimum time. NDL India is designed to hold content of any language and provides interface support for leading Indian languages. It is being arranged to provide support for all academic levels including researchers and life-long learners, all disciplines, all popular form of access devices and differently-abled learners. It is being developed to help students to prepare for entrance and competitive examination, to enable people to learn and prepare from best practices from all over the world and to facilitate researchers to perform inter-linked exploration from multiple sources. The pilot project is devising a framework that is being scaled up with respect to content volume and diversity to serve all levels and disciplines of learners. It is being developed at Indian Institute of Technology Kharagpur.

DELNET:- DELNET was started at the India International Centre Library in January 1988 and was registered as a society in 1992. It was initially supported by the National Information System for Science and Technology (NISSAT), Department of Scientific and Industrial Reseach, Government of India. It was subsequently supported by the National Informatics Centre, Department of Information Technology, Ministry of Communications and Information Technology, Government of India and the Ministry of Culture, Government of India. DELNET has been established with the prime objective of promoting resource sharing among the libraries through the development of a network of libraries. It aims to collect, store, and disseminate information besides offering computerized services to users, to coordinate efforts for suitable collection development and also to reduce unnecessary duplication wherever possible.

NPTEL:- NPTEL is an acronym for National Programme on Technology Enhanced Learning which is an initiative by seven Indian Institutes of Technology (IIT Bombay, Delhi, Guwahati, Kanpur, Kharagpur, Madras and Roorkee) and Indian Institute of Science (IISc) for creating course contents in engineering and science. NPTEL as a project originated from many deliberations between IITs, Indian Institutes of Management (IIMs) and Carnegie Mellon University (CMU) during the years 1999-2003. A proposal was jointly put forward by five IITs (Bombay, Delhi, Kanpur, Kharagpur and Madras) and IISc for creating contents for 100 courses as web based supplements and 100 complete video courses, for forty hours of duration per course. Web supplements were expected to cover materials that could be delivered in approximately forty hours. Five engineering branches (Civil, Computer Science, Electrical, Electronics and Communication and Mechanical) and core science programmes that all engineering students are required to take in their undergraduate engineering programme in India were chosen initially. Contents for the above courses were based on the model curriculum suggested by All India Council for Technical Education (AICTE) and the syllabi of major affiliating Universities in India.

NPTEL provides E-learning through online Web and Video courses in Engineering, Science and humanities streams. The mission of NPTEL is to enhance the quality of Engineering education in the country by providing free online courseware. SMS Lucknow, Library & Documentation Centre, had setup SMS-NPTEL Local chapter on Dec, 2015.

The main objective of this SMS-NPTEL Local Chapter is to create awareness and enable students to obtain certification programme which make them employable or a suitable person for higher education.

"To become a constantly growing centre of excellence nurturing global-centric, ethical & eco-friendly research and innovation on contemporary environmental issues to save Earth & Life."

To develop eco-friendly technology, advance scientific research and innovation which can save Earth & humanity. Experience: He has approx. 46 years experience of Industry, Administration and Academics. He has Served 32 years in various government organizations and Retired as Managing Director, UP Rajkiya Nirman Nigam (UPRNN), Lucknow in 2004. He has served as academician at various positions for the last 14 years. Currently he is working as Director General (Technical) at School of Management Sciences, Lucknow.

Administrative Achievements: He accomplished the assigned govt. projects much before the desired time, for e.g.; State Sugar Mill, Rae-Bareilly in 13 months against 48 months (i.e. in January 1980); BHEL, Jagdishpur Insulator Plant Project in 18-months time against 24 months (i.e. in 1981). Thus, UPRNN was recognised by the state government for creating new records in the construction field.

Academic Achievements: He has invented an Air-Engine which runs on Compressed Air releasing Zero Emission curbing Carbon emission to about 50-60%. He has also researched on Vedic Science: found Ahiravan Patal Lok in Central America; and 108- Manika in Rudraksha: each considered diameter of the SUN, works out to distance between the SUN and the EARTH.

Publications: He has been working on Carbon Foot Print, Environmental issues

Awards: He is a recipient of many awards & recognitions:

World wide huge demand of vehicles is resulting in a rapid consumption of fossil fuels and causing fast depletion of energy resources. Most motorcycles in the world today use engines that burn gasoline, contributing to greenhouse gases and adding air pollution to the surrounding area. It is ultimately causing serious threat to mankind on account of global warming and climatic changes. Since the enormous potential of air is freely available in the atmosphere which can be compressed and utilized as zero pollution energy source to address the Global Warming issues. This has been root cause to invent Novel Air Turbine Engine for two wheeled vehicle. This engine uses compressed air to turn a small air turbine, generating enough power to run a motorcycle for up to 40 minutes.

World wide huge demand of vehicles is resulting in a rapid consumption of fossil fuels and causing fast depletion of energy resources. Most motorcycles in the world today use engines that burn gasoline, contributing to greenhouse gases and adding air pollution to the surrounding area. It is ultimately causing serious threat to mankind on account of global warming and climatic changes. Since the enormous potential of air is freely available in the atmosphere which can be compressed and utilized as zero pollution energy source to address the Global Warming issues. This has been root cause to invent Novel Air Turbine Engine for two wheeled vehicle. This engine uses compressed air to turn a small air turbine, generating enough power to run a motorcycle for up to 40 minutes. Students of Diploma - Civil Engineering made an industrial visit to Ultratech RMC Plant , Raebareli Road on 7th May 2022.

During the visit the marketing and technical team of Amul provided valuable inputs and viable strategy to the students to enhance their knowledge.

The visit was quite productive for the students and improved their insight about the dairy industry.

During the visit the marketing and technical team of Parag Dairy provided valuable inputs and viable strategy to the students to enhance their knowledge.

The visit was quite productive for the students and improved their insight about the dairy industry.

An industrial visit to Encardio Rite

An industrial visit to Encardio Rite was organized on 18th November'22 for the students of B.Tech-EC .

SMS Lucknow organized an industrial visit for the students of B.Tech and Diploma Engineering - M.E to Gobind Industries, Barabanki on 10th December'22.

During the visit students were exposed to operational excellence and functioning of DIAL 112 facility for citizens. The PGDM (2019-2021 batch) students of SMS Lucknow and SMS Varanasi went on an International Trip to Malaysia from 23rd January to 28th January 2020. It was an industrial cum excursion tour which started from the  visit to Yakult Factory, proceeding to First World Hotel, World'slargest hotel in Genting via cable car. The next day was again an industrial visit to Royal Selangor Pewter along with visit to Batu Caves, the oldest temple in Malaysia. Following day was the day filled with zeal and enjoyment in SunwayLagoon Water Park and the night was all about DJ Night at Quill CityMall.Then it was a city tour covering places :King's Palace, National Monument & Independence Square, Lake Garden, Geneva Watch Outlet and Harriston Chocolate Outlet. Last day was Photostop at Petronas TwinTower, Aquarium KLCC following with Prime Minister Office and Pink Mosque at Putrajaya .Also the students went to Berjaya Times Square for shopping. At Kuala Lumpur the students satyed in IBIS Styles, a 3 star hotel in KualaLumpur.With the total number of 120 students & 2 faculty members, the trip waswell managed. It was a maiden foreign trip for some, everyone had a good experience along with some learning. Overall, it was an informative and enjoyable trip for the students .

The aim of “VEDIC RESEARCH CENTER” is to work in the field of different knowledge systems of India, to reveal the essence of wisdom enshrined in the Vedas and to propagate it for the benefit of mankind. The different streams of knowledge like scientific heritage of India, history, philosophy, religious studies, mythology, psychology and cultural studies are enshrined in Vedas, which are to be identified and developed. All these are to be addressed by detailed research, investigation and evaluation. This is the key factor that kindled the idea of setting up a Center of Vedic Science at SMS Lucknow.